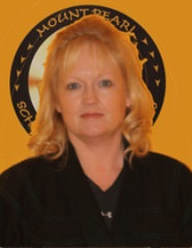 Luanne Snow   - Administrator and Marketing Coordinator
Has been a member of the Mount Pearl School of Martial Arts since 2006 and earned her Brown Belt in 2011.  Luanne enjoys all aspects of the martial arts and has a particular interest in working with beginner students, helping them to develop the skills necessary to progress through their training.

Her attention to detail makes her particularly effective in this activity.  Before entering the martial arts, Luanne maintained her conditioning through years of aerobic training.

In addition to her training and participation in Club life .Luanne has also played a key role in support of all aspects of the development of marketing and promotion for the Mount Pearl School of Martial Arts.  Luanne lives in Mount Pearl with her husband, Peter and their two children, Hanna and Adam. 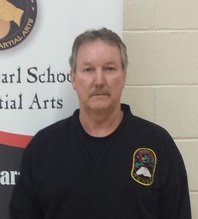 ​Paul Lahey  is a faculty member of the Applied Arts Department at the College of the North Atlantic teaching the 2 year Community Recreation Leadership program. He joined the MPSMA in 2011 and currently holds a brown belt with the senior adult class.

Paul began his martial art training over 20 years ago completing 8 years of Tae Kwon Do training, until he decided to raise a family and pursue his Masters Degree in Education at Memorial University. Paul has an extensive background working with volunteer boards in the Community Development sector and has held a number of positions with many recreation and volunteer based organizations  including Chairperson of a number of provincial and national boards.

​ Paul enjoys working with people of all ages, loves teaching, and a passion for martial arts, making him a great addition to assist with various levels and classes at the Mount Pearl School of Martial Arts. 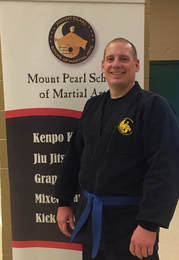 .
Andrew Tilley is the owner and operator of Driven PowerSports located in Mount Pearl, with more than 20 years of retail experience and 30 years in the power sports industry.  Andrew is also an avid back country snowmobiler, guiding small and large groups in the back woods of western Newfoundland.   Andrew also sits as a executive member of the Motorcycle Ride for Dad board to help raise funds in the fight against prostate cancer. 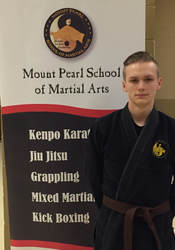 Brett O’Keefe is a grade 11 student at Mount Pearl Senior High who has a deep love for science, medicine, sports and travel. He has been involved in Martial Arts from a young age when just starting in 2008. He worked hard for the last couple of years to finally receive his Brown Belt in 2017 and is currently working hard towards his Black Belt.

Brett is part of the Canadian Army Reserve and would find the training involved much harder without the years of involvement with the MPSMA.

​With a love for soccer and running, the exercise and lifestyle of being part of this Martials Arts club of friends and family is a perfect fit. This Dojo is a major contributor to his mental and physical strength. 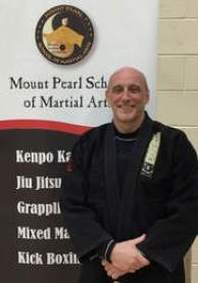 Blair Davies  business owner/operator for the past 25 years and resides in Mount Pearl. He is a member of the Canadian Professional Sales Association and past board member of the Newfoundland and Labrador Construction Association.

Blair  originally from Grand Falls-Windsor   is very passionate when it comes to physical fitness and sport. In school he played all sports until he was scouted at the age of 12 to become a member of the NL speed-skating team. He travelled and trained across Canada and the US and competed in the Canada Winter Games.

Four years ago Blair joined the Mount Pearl School of Martial Arts and  holds a brown belt with the senior adult class. Blair enjoys sharing his knowledge with other members and assisting classes of all ages. 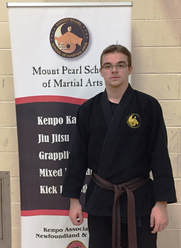 Christopher O' Halloran  has been a part of the MPSMA family since 2008 and he holds a brown belt with black stripe and is working hard toward his black belt. Being the oldest of four boys he takes his role of junior instructor very seriously and enjoys teaching the younger members.

Has helped his younger brothers their belt levels and considers it an honor to present them with their new belts at each grading level.

Outside MPSMA Chris enjoys spending time outdoors at the cabin, doing yoga and you can usually find him at a basketball court. He devotes his full time to the O’Donel High Scholl basketball team where he has been a shooting guard since grade 10.
​
Once he graduates in 2018 he plans on a career in the RCMP. 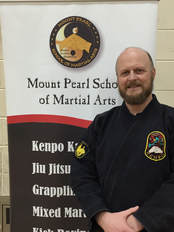 Craig O'Keefe  I have a wonderful family with my fifteen year old daughter, Shea, and twelve year old son, Brett, and beautiful wife of twenty years, Tracey. They are what ground me. I have worked with children/youth for the last twenty years, 8 years with the B.C. Ministry of Health (Maples Adolescent Treatment Centre) & 12 years with the Eastern School District of NL (in teaching, special services, and guidance roles).

Presently, I am working as a Guidance Counselor and Instructional Resource Teacher at St. Edward’s K-6 School in Kelligrews, CBS. I have tried Aikido for a year while at MUN, experienced SUN-HANG-DO and JUDO during my 10 year stay in B.C., but finally found my home with MPSMA in Mt. Pearl. This is my sixth year as a student of MPSMA, and presently hold a blue belt level.
​
This year I have volunteered to be an assistant instructor for 6:10 and 7:20 classes, and it has proven to be rewarding. The mixture of karate, ju-jitsu, grappling, & kick-boxing has made this a well-rounded experience. This club is more than a dojo. It is a family who learns, grows, & cares together. I am lucky to be a part of this. 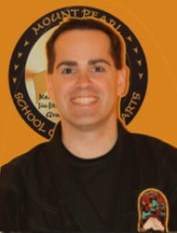 Dean Menchions was inspired as a teenager to join the MUN Shotokan Karate Club in 1990 by  watching the first Karate Kid movie .  Dean achieved  his blue belt in Shotokan at the MUN club before his professional life took him to Ontario.

​After a hiatus of a number of years Dean found a local Kung Fu club and moved up through the ranks to Triple Black Stripe.  Three months away from a full black belt, he was offered a position as a Financial Advisor back home in Newfoundland. He moved home with his young family in 2004 and started training at MPSMA. He has since been advanced to Black belt (2013) .