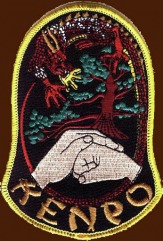 The word "Kenpo", translated literally, means "Law of the Fist", or fist method. It is an ancient martial art that traces its origins to 6th century AD China. Kenpo therefore predates the arts of Japanese or Korean origin, such as Karate, Judo, Tae Kwon Do, or Aikido, by many centuries. Kenpo is referred to as a "parent" art, and is considered also to be the original complete and comprehensive martial art.Today Kenpo is practiced in all parts of the world. There are many different "systems" of Kenpo within the Kenpo family, with different emphasis on various components of the art. But all extant Kenpo systems and organizations trace their lineage to the Kenpo which existed centuries ago, and which was the predecessor to karate systems whichevolved later in Japan. In fact the word "karate" was not in use until the introduction of the art to Japan by Funakoshi in the early 1920's. This is one of the reasons we call Kenpo a parent martial art.A somewhat over simplified way to classify the variety of martial arts practiced today is to describe them as primarily striking arts, or primarily grappling arts. Striking arts like karate and tae kwon do can be referred to as Oriental forms of boxing. They rely mostly on blocking and striking techniques for their effectiveness. Grappling arts like Judo, Aikido and Ju-Jitsu are, roughly speaking, Oriental forms of wrestling. Kenpo is a blend of striking and grappling, with the goal of becoming effective at any fighting range, from the longer kicking range to the closer grappling range.

Kenpo constantly stresses flexibility. By this we don't mean muscle flexibility, although this is developed, but a total flexibility of response to an attack. This flexibility is acheived by being competent at fighting in all ranges and in all environments. It also means that both hard and soft techniques are used where appropriate.

The whole of an opponenets' body can be considered an appropriate target in self-defense, and almost any part of our own anatomy can be used as a natural weapon. Kenpo training attempts to develop the ability to use each weapon in all its motions. It becomes a matter of logic, for example, as to how many ways there are to hit an opponent with an elbow. Something in the way of flexibility can be learned by watching the hands of an symphony conductor. The rhythm changes, while the movements alternate between hard and soft.

In a fight a change of pace is harder for the opponent to anticipate, and allows one to blend with the opponent's reactions. To avoid wasted effort and maintain poise and balance, soft movements are combined with hard ones. By varying the amount of force, the weapon, and the target, it is possible to keep an opponent off-balance and to regulate the degree of damage.

The training required in Kenpo can be quite rigorous, and develops a sound body, mind, and spirit. Self-discipline is also developed, and ultimately benefits us in all aspects of our lives. This is the ultimate goal of Kenpo training - the development of all facets of the individual.