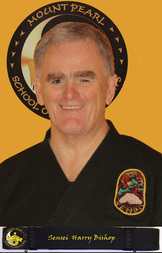 Harry Bishop  joined the Mount Pearl School of Marital Arts in 1996 and was awarded his Black Belt in June 2003.  Since that time he has been active as an Instructor and thoroughly enjoys all aspects of martial arts training.

​Sensei Harry credits his involvement in the martial arts with improving his overall health and lifestyle.  In 2012 he retired after 33 years service with the provincial government.  He enjoys regular daily exercise and is a student of Tai Chi and Yoga as well.
​ 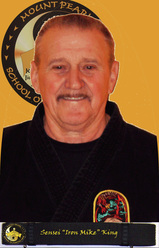 Mike King initially began training in 1972 with Sensei Dave Jackman and later received his Black Belt when training with Sensei Mike Foley in 1992.

​At the age of 72 "Iron Mike" is a dynamic touchstone to the earlier days of Kenpo in Newfoundland and Labrador and he is still a daunting and awe-inspiring, training partner for everyone, including his grandson Michael who also trains at MPSMA. 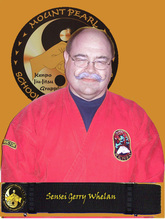 Gerry Whelan  joined the MPSMA in 1999 because martial arts was an activity he could share with his son Liam. Gerry received his black belt in March of 2004. Gerry  assists in teaching the children's and adult classes. Gerry competed at the provincial and national level in amateur wrestling while attending Memorial University from 1977 to 1983 and coached briefly at the High school level. He works as a geological data management specialist with an international oilfield service company and credits the MPSMA family with such major health benefits as stress reduction, improved fitness  and wonderful friends. In retirement Gerry has turned to a new career and has taken up his love of photograpy.