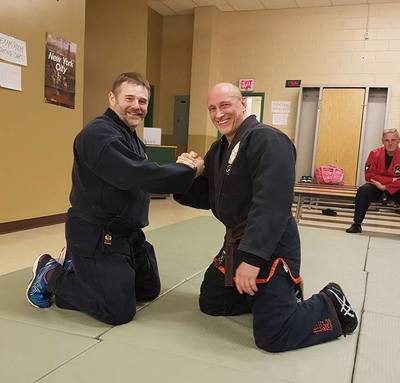 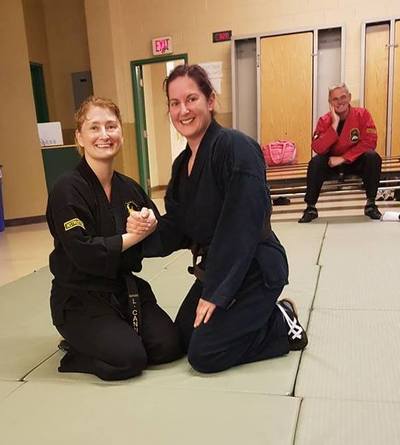 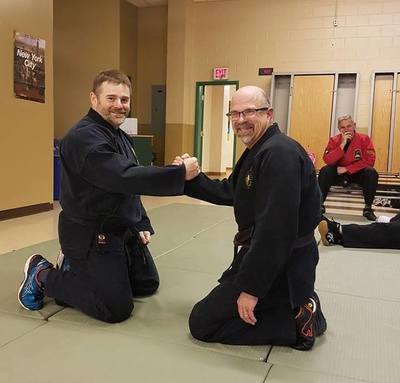 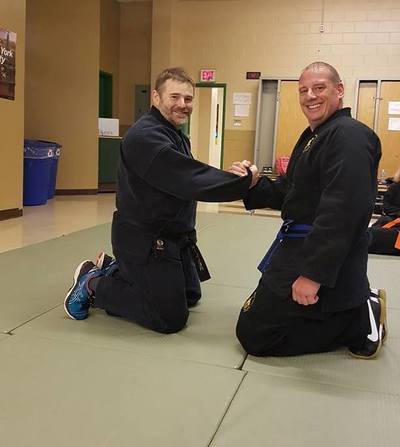 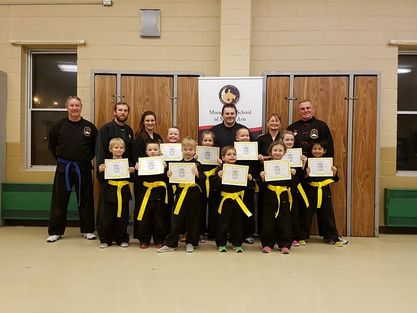 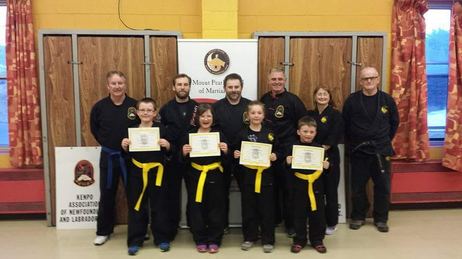 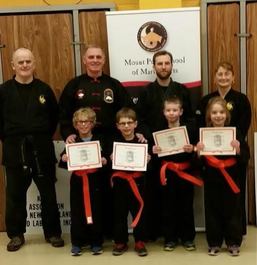 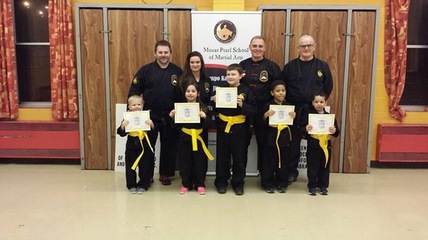 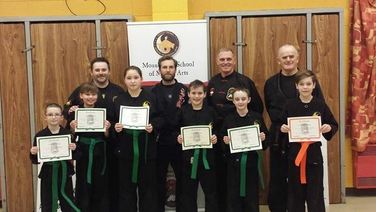 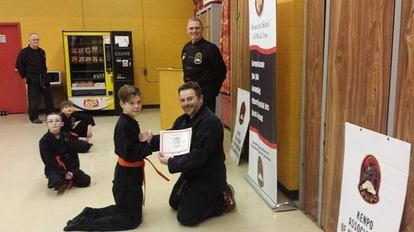 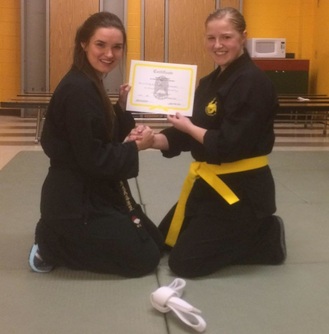 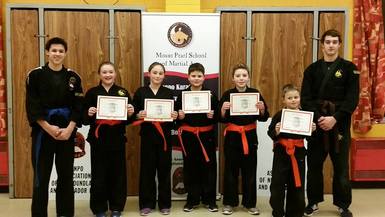 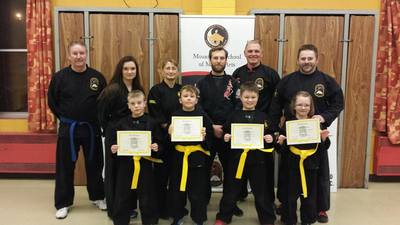 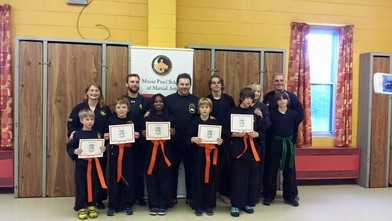 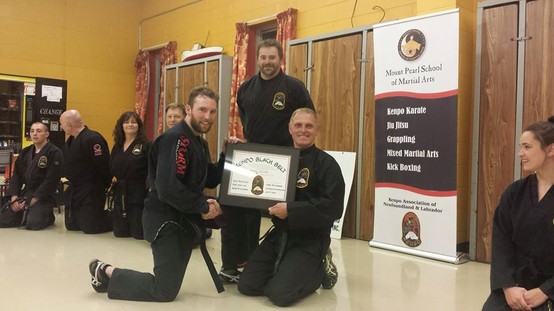 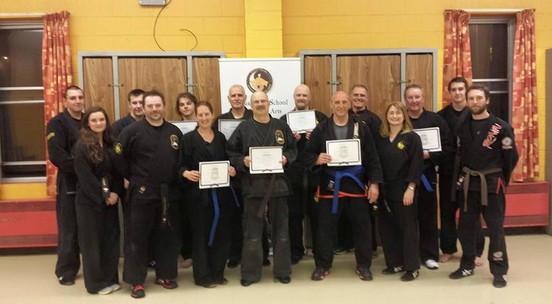 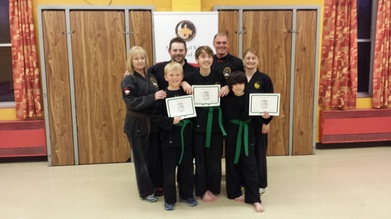 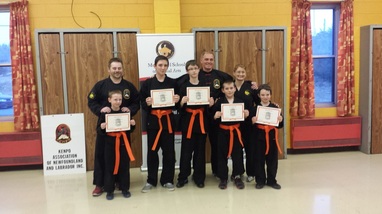 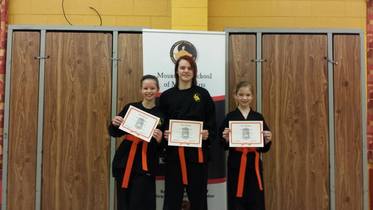 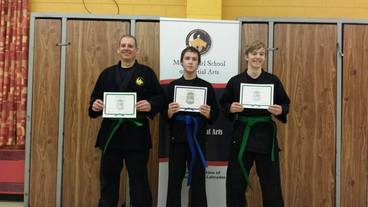 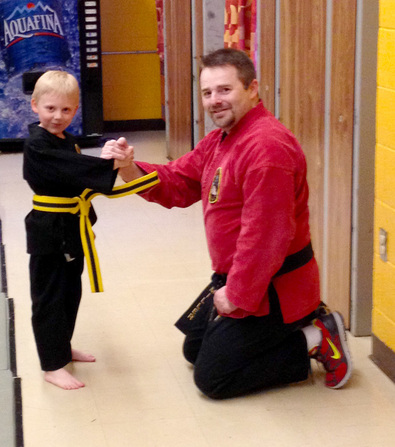 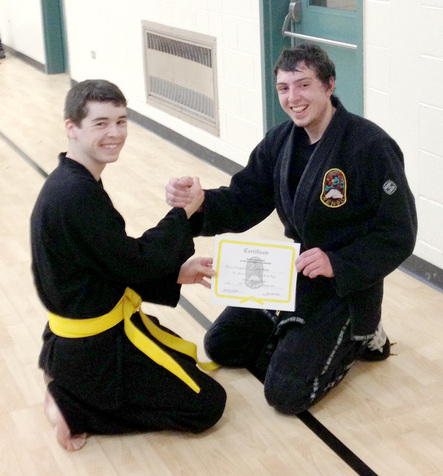 All May 3rd Grading Pictures taken by Lisa Canning

On behalf of the Mount Pearl School of Martial Arts I am proud to announce that Sensei Shelly Melee and Sensei Mark Efford successfully completed their Black Belt Grading on Tuesday evening, May 10th, 2011.  This is a significant and hard-won achievement.  Both individuals have committed a number of years to their training in order to achieve this award.
Shelly and Mark, under the watchful eyes of twenty-one of the finest Kenpo Black Belts (in my opinion) on this Island, were drilled to demonstrate their skills in all aspects of our program.  The grading covered kicking and punching techniques; continuous fighting and kick boxing combinations; grappling techniques and grappling; as well as stress and stress management situations.  The finale of the evening involved the completion of 250 push ups in 7 minutes by both Shelly and Mark.  Promotion to Black Belt carries with it the responsibility of Integrity and this is demonstrated when the person involved is guided in her or his life by the values of honesty, fairness, ethics, and moral character.

I am proud to state that in my opinion both Shelly and Mark have demonstrated their dedication to training and integrity over the past several years of their involvement with the MPSMA.  To have them both join us now as active Black Belts with The Mt Pearl School of Martial Arts makes me very proud and thankful.  I have always considered myself blessed to be surrounded by a wonderfully dedicated, dependable and loyal group of friends who have been the nucleus of our Family at the MPSMA.

In closing I would like to acknowledge the following friends for making Sensei Shelly's and Sensei Mark's promotion possible.  Firstly I offer my thanks to our Black Belts in attendance:

Sensei's Rebecca Reid; Darrell Efford; Dennis Rose; Steve Mallard; Dan Tobin; Mike Lush; Harry Bishop; Gerry Whelan; Craig Heath; Jason Dillon; Jerome Whelan; Adam Mercer; Andrew Mercer; Liam Whelan; Glen Delaney; Mike Rickert; Andrew Blundon; Mike King; Roger Miller and Andrew Young. Thanks as well go to our Assistant Instructors Lisa Canning, Maureen Ryan and Luanne Snow for preparing for the social.  Congratulations to the family and friends of both Shelly and Mark who were in attendance for the presentation and the social.  This was the second Black Belt awarded to a member of the Efford family and on this occasion Sensei Darrell presented his brother Mark with his Black Belt.  Sensei Shelly’s Black Belt was presented to her by her significant other, Sensei Craig Heath.

Special thanks go as well to Senseis Danny, Roger, Mike, Andrew, Adam, Liam, Dennis and Glen for assisting with the grading process as well as the kickboxing and grappling rounds.  Thank you to one and all for your participation, kindness, dedication and loyalty to me and to OUR club.